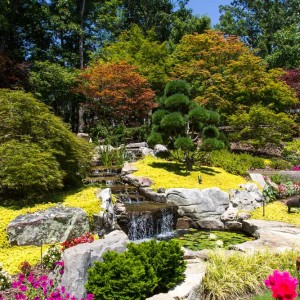 The Werner residence underwent a complete landscape renovation in 2012.

The fescue lawn was removed and Zeon Zoysia was installed.  New beds were created and flowering shrubs and perennials were installed.  The yard now has numerous flowers from sun and shade loving shrubs, perennials and annuals.

A Japanese garden was installed in the winter of 2014.  Numerous Japanese Maples of different varieties have been installed throughout the property.  Given a few years too mature, the pictures in 2015 will be amazing.  We take care not to overplant shrubs and trees that will outgrow their allotted space in several years.  Therefore it takes a few years to mature.

In the case of the Japanese Garden, Mature Japanese Maples were brought in using a 90” tree spade and a shooting boom fork lift to install the trees weighing about 6,000 pounds each.  Many of the plants have been imported from the west coast, primarily Oregon.  Photos and descriptions of these trees can be seen in our Resources section under trees and Japanese Maples.